FBF = Flash Back Friday. We use that here at From Ad-Libs To Zephyrs™ for old posts. Meaning posts that we’ve already posted here on the current blog location, or a previous location, or on other platforms, that we want to re-address. LOL it is also for when we miss TBT (Throw Back Thursday) and can’t get to WordPress quickly enough to post our from A to Z commentary amid the old images of pre-school, middle school, and “befores” and “afters” that floods the Internet.

Today’s FBF is a Trump topic. Whether you like him, dislike him, or don’t give a rat’s about it either way, still read. This is something that I typed in the after math of wanting a woman to be President, but realizing that for reasons that the next 4 years will likely unfold, maybe this wasn’t the time. And as much as it pains me, maybe she wasn’t the candidate to do it.

No matter the higher power you believe in, the most consistent lesson amid all religions is that “everything happens for a reason.” It doesn’t matter which language it is, or the words that describe the statement.

The truth of the matter is we don’t know what the next 4 years will bring. And if we stop rolling on the ground with

our fists balled up; having temper tantrums. Wailing about what the next President of the United states isn’t. And why he doesn’t qualify for the role. And how he’s a racist. Maybe we can actually listen to what he’s saying.

Obama, my dear readers, is literally only allowed to do it for 8 years. Though he will be SORELY missed, and I have never watched the goings ons of the White House quite so much as when the Obamas were there, it is time for the next chapter.

But don’t go in with blinders. Open your eyes, and your ears. And move into this next moment in history that you have the opportunity to be a part of with full attention.

Your attention, not your antics are needed over the next 4 years. Make the right decision.

I had a whole day to think about the election because I was disappointed not because Hilary was the best Democrat in the world but for me her presidential accomplishment would have been a beacon of hope to me for continued change that Obama’s term began. I’m a woman and though Hilary isn’t a woman who looks like me.. she IS a woman.

There’s a glass ceiling that women face everyday because men consider them to be “less than.” Eff race, just gender can get a woman pushed to the side.

So these elections basically said to me what the world says to so many all the time (including to me) : In the choice of black man or any woman, we’ll take the ****** (you know what word that is) because at least he’s a man.  And in the case of white man vs white woman we’ll DEFINITELY opt for the white man (dafuque you thought).

If you know I have my own business you know I luv what I do. But what you don’t know is I get side-eyed and snickered at when clients realize “CJ” can also be the initials for a short little mixed chic. So when they see me they see DOUBLE “less than” (until I mollywhop their arses with my level of skill).

For 8 years I thought change had the right to flourish beyond racial and gender-based tradition, but in the grand scheme of things I see this country is still the wonder bread oppressive monster that it has always been.

Hell, to keep a woman out of office even some of the Democrats went from azul to rojo (Republican) with the quickness.

From the Big Apple To The Big (White) House

Now on to my Trump thoughts…

Something that most people don’t know is that Trump used to be a STAUNCH democrat. I know that’s hard to believe because he’s such an evil-esque billionaire but it’s  true.

Also… prior to this election process the Clintons and Trump were besties. Like “I’m having a BBQ Trump get your azz over here and don’t forget the potato salad” besties.

So at the beginning of this thing I had already said to myself this is Hilary’s ultimate plot to gain presidency (which she’s wanted since she was First Lady–if not before).  And it makes sense because if you guys don’t already know women are some of the most long game thinking strategist you’ll ever know.

This thought ran through my thinking wheels when I heard an open letter that Russell Simmons (yes Phat Farm / Baby Phat R.S.) wrote to him basically saying : “Dude, who dafuque are you right now?!” –because yep you guessed it Trump’s Democratic arse also used to be besties with Russell.

I looked around the proverbial room and was like:

“Ahm don’t nobody else see this?”

A long time ago, at the beginning of all this rigmarole, I saw his rancid acts and ridiculous outbursts as his way of getting the “estupido” racists to back him so that he could be the nominee and so the nation (and electorate because God-forbid I forget to mention that to voters and non-voters alike) would swear in Clinton. However. They didn’t realize just how powerful and stubborn the “elephants” are and how badly even the “for the people” bleed blue donkey gang (Democrats) didn’t want a woman in office so now you have a no-qualified President who says and does anything running not just the show, but the country.

I say all of that to set up the idea that Trump just may surprise our arses. Because after all if you let people who’ve known him forever tell it he’s basically a Democrat in Republican’s clothing. He very well could be getting ready to play the shyt out of all them blood red elephants. Only time will tell the story, so we should stay tuned for the next 4 years of chapters ready to unfold. 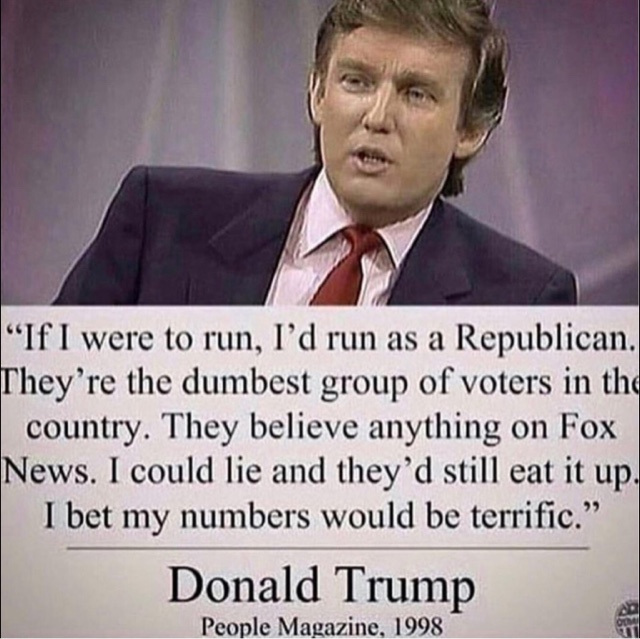 Subscribeto From Ad-Libs To Zephyrs™